Two festivals, and a trial by weather!

After playing the excellent Ardersier Folk Festival - what a great bunch of folk run this club! - I headed to Inverness on Monday 19th September to pick up the Lady of Avenel, bringing her to Buckie for the Findhorn Bay Festival - and what a line-up the organisers here had prepared! Our own role was to sail out of Buckie twice a day, as Stories, Sessions and Sail.

Fair winds brought us along the Moray coast, and we tied up in Buckie Harbor; there we decorated the ship with the spectacular signal flags made by EcoArt.

Being from a traditional fishing community myself, it was great to be in Buckie and I met loads of interesting characters aboard and on the pier. Fishing skippers, people who talked about the gala days that used to be held - an event that sounds so similar to the Cullivoe Gala, interested folk that wandered down to the pier to see this unusual visitor.

We brought interesting folk to sea with us on the sails - storytellers Anna Fancett and Alex Patience, musicians such as Briann Ó hEadhra and Fionnag NicChoinnich and family, Su-a Lee, Hamish Napier (just married - a huge congratulations to them!) and of course Charlie Grey and Carol Anderson as part of our ship's crew. It was so good to get to jam with these great musicians once the ship was alongside after the sails!

On Sunday, a truly foul spell of weather set in; we were forced to cancel the afternoon sail. With wind picking up to 40 knots from the North West, a swell began to creep into the harbour and we were soon surging at our berth. With twelve mooring lines out, Carol, Charlie and I tended the ship with concern as increasing stress loads came on the ropes; the worst of the wind was forecast for 4am, so we stayed up attending lines and watching until this passed. Finally grabbing some much needed sleep, I was awoken again at 7am to the sound of a spring parting, and dashed back on deck to retension and tend the remaining lines.

All day the conditions deteriorated until there was no way to transfer crew between ship and shore, the swell causing us to range up and down the berth. At 8.30am the harbour sent us some extra mooring lines as by this time we had snapped four of the fifteen we now had out. And at 5pm, with the wind and motion increasingly violent, our heavy storm head line, purchased in Orkney in May, parted with a loud bang. This was a moment of real danger - there was no way to leave the harbour, but the pier was no safe place to be either. Another call to the harbour and they sent a 46mm super heavy hawser which we rigged forward. We spent the next four hours fixing extra chafe prevention and doing all we could to preserve the mooring lines until the gale would eventually blow itself out. 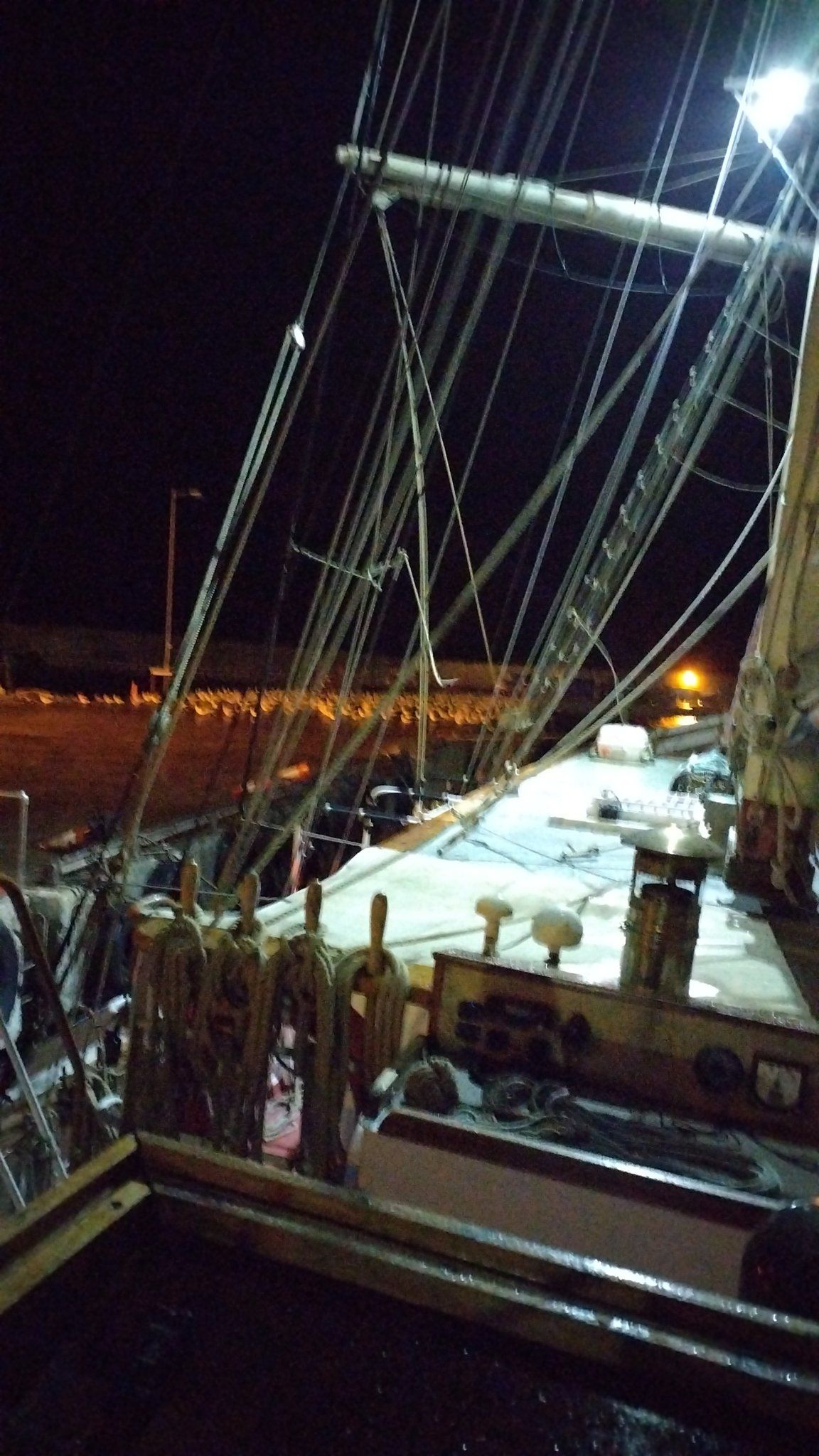 By 1030pm another spring, and one of the stern lines, parted - I started the engine and for the next five hours worked the ship back and forth against the surge, trying to minimise strain on the ropes, whilst Carol and Charlie worked chafe gear into pinch points, cutting up old hose and fenders, anything that would reduce the battering and keep the ropes from chafing away for a bit longer. Another long night of no sleep, but by 5am things had begun to improve with the falling tide.

Tuesday evening brought enough respite for a small birthday celebration; Carol had somehow managed to make a cake! Tough conditions can bring a crew closer together and we together with Lydia, Ben, and Mark, Jo and Robbie from the LAND flag project had a pleasant conversation over food and cake.

Conditions were still too rough to sail from the harbour on Wednesday, but by evening had calmed right down and we felt safe at last, the ship now relatively still. We finally got a taste of the Festival ourselves, heading to the Marine Hotel to join the ceilidh. It felt like we were sleepwalking into a dream, salt-rimmed eyes finding the room decorated for a concert with a nicely lit stage, a good sound system and Hamish Napier hosting a concert.

Sharing a stage with fiddlers of the calibre of Carol and Charlie for our spot may have been intimidating under normal circumstances; I had had zero time to consider it!

By 4am we had to be on our way once more, departing Buckie - there was an even stronger blow forecast for Friday and the weekend, and having no desire to be caught in another north-wester, we knew Thursday was our only weather window. So at 3.30 am Ben and I got the ship underway in the darkness, three passengers onboard as we tried to make up for four days of disrupted day-sails.

In Nairn we anchored and took another group of passengers aboard, Charlie leaving us to head for Seattle for his next gig; and by 5pm we were at Inverness, locked in and all secure in the Muirtown Basin.

Here I left the ship also, at a level of exhaustion I have rarely reached. This week has been a reminder that Sessions and Sail works well when weather is good - but when things get difficult there is no room for anything but giving 100% to the survival of the ship.

It has also reinforced the incredible team we have aboard the Lady of Avenel - the crew that give whatever it takes without complaint, only growing stronger as a result; the humour that has never failed yet; the knowledge that we can rely on one another through whatever may get thrown at us. And of course the cake.

Buckie folk and Shetland folk know exactly what the weather can do - thanks to the town, the harbour and the Findhorn Bay festival for hosting us!