It's a pleasure to be writing from Shetland, there's nowhere like home, especially after 7 months of covid-enforced exile. And I've decided to continue the story of my first voyage aboard Søren Larsen today, and take us through the Panamá Canal from Limon Bay to Balboa on the Pacific side.

5am - and darkness surrounded Søren Larsen, save for the anchor lights of ships.  The peace of the night gave way to excited whispers that grew in volume as more and more people appeared on deck.  Suddenly there was a hiss of air, and a bang, and the main engine thumped into life; the whispers grew to murmurs, and I noticed a faint band of twilight above the eastern horizon.  All hands had been called  to prepare for today's passage through the Panamá Canal.

I had no trouble finding crew to help raise the anchor.  Windlass-driver, chain-flaker, messenger, bell-ringer, cable-washer; we had the lot in place before I had asked.  We headed forward and took the cover off the windlass motor.  Rob wound the handle, flicked the decompression lever and the single-cylinder Lister engine kicked in.  Mary at the top of the forward companionway reported that Troy was ready below decks; she would relay communications to me as he ensured the anchor chain was stowed in neat flakes in the locker below.  Charlie arrived with the deck hose ready to blast the Limon Bay mud back into the sea as the cable came in; Monica was in position by the ship’s bell ready to ring off the shackles.

Soon the anchor was home, the cable locker was secured, and Søren Larsen was steaming towards the pilot station with a dim grey light beginning to reveal the silhouettes of the ships behind the anchor lights that surrounded us.

At the boarding area, Lucy swung the gate open as the launch drew alongside us, and the pilot stepped across onto Søren Larsen’s deck.

“One-Eight-Zero, Captain!” he shouted as he strode aft.  “Full ahead!”

The pilot was a small man with a serious expression and sunglasses on before dawn. By the wheel, as we motored towards the canal approaches, he explained his strategy to Colin.

“We will head for the Gatun Locks first.  The lock master will tell me when we are clear to enter the lock. We will be sharing the lock with a larger ship.  The canal have agreed that you will not use the mules; your line handlers are good, sir?”  Colin nodded.

Larger ships passing through the Panama Canal are dragged through the locks by mechanical locomotives known as ‘mules’.  Søren Larsen’s timber hull could easily be damaged by the forces these mules can exert, so we had requested to handle our lines manually.  This meant that our crew would have to be very sharp, taking in slack promptly as the ship rose with the water level.

I arranged the eight crew designated to me at the aft mooring stations: four on port, and four on starboard, an experienced hand at the front on each line to ensure they were handled safely. Soon, we were motoring into the first of the Gatun Locks. Four Panamá Canal line handlers threw their heaving lines to our deck; we made them fast to our mooring lines, and they were heaved up and looped over the bollards on the lock sides. The lock gate closed behind us, the water started to rush in, and soon our mooring teams were heaving in slack hand over hand.

Once we reached the height of the lock walls we were able to view the countryside beyond; but before there was time to rest, the gates opened and we motored into a second lock where this was repeated. There was a third lock, and our line handlers began to sweat, grinning through the exertion and the growing heat of the tropical day.  Emerging from this third lock, we motored out and into the Gatun Lakes, the man-made lake that forms the central part of the Panama Canal.

The canal route follows a buoyed channel for 24 miles through the Gatun Lakes, with vivid green rainforest growing densely right down to the water’s edge and beyond; the tops of trees that were growing before the valleys were flooded still protrude from beneath the water, giving the lake a slightly unnatural feel.  The rainforest is crucial to the canal’s existence however, and is strictly protected; without the trees, the water would soon dry up and drain away, and the sea route would be lost.

Past small islands, bursting with tree life (actually the remnants of hills, poking their summits through the surface) we glided along, through the mud-brown water of the lakes. I climbed to the topgallant yard; the view was superb, the red and green buoys dotted out our path ahead, dense canopy cloaked the countryside in deep, primal green. 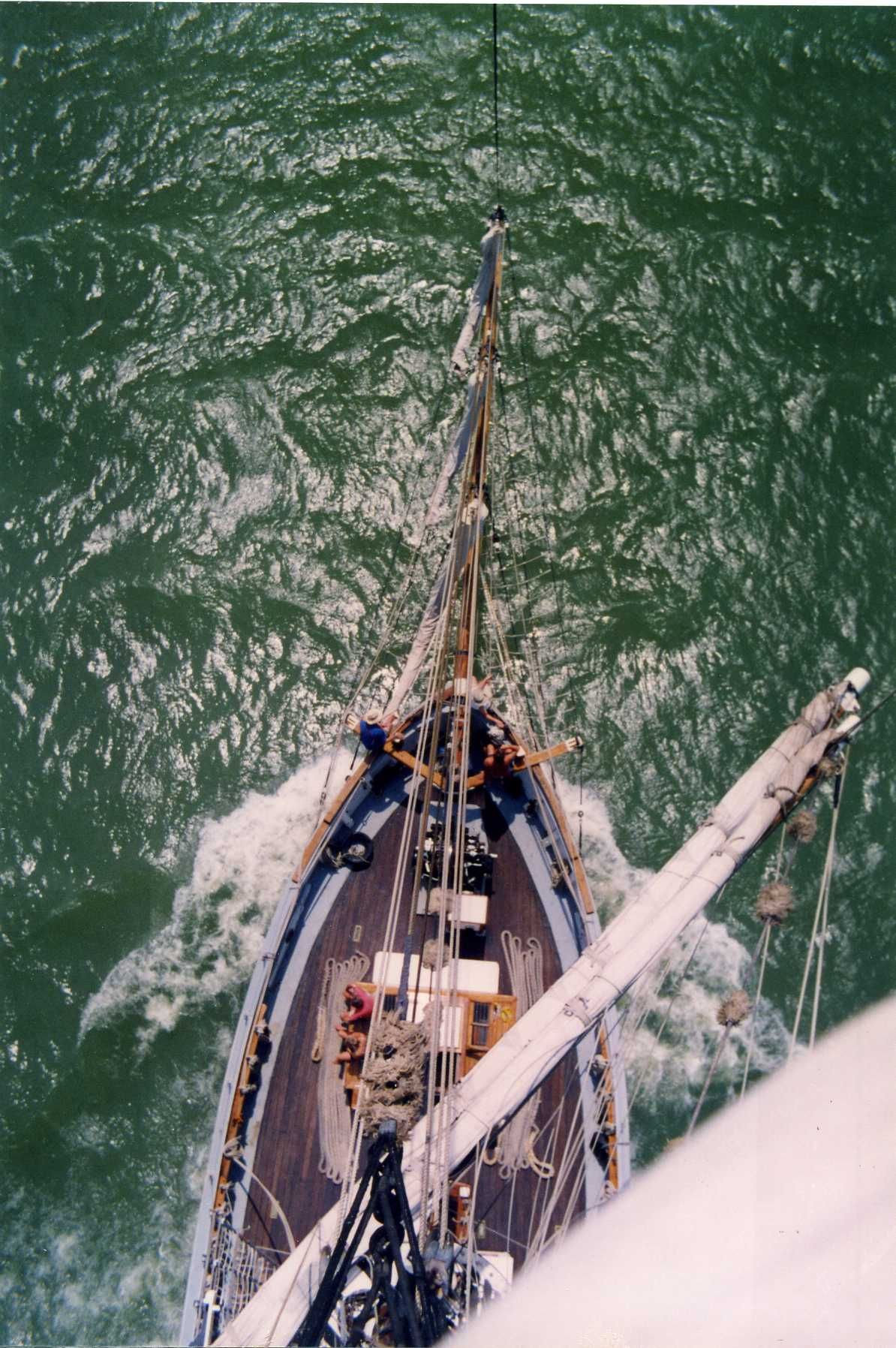 Lunchtime came; the crew were fed in shifts, taking turns to steer, keep lookout, and watch the shipping traffic move through the lakes.  The wind picked up steadily until soon we had thirty knots blowing from the east.

The passage became tense as we approached the Pedro Miguel locks; the strong wind was reducing our options, making it difficult to slow down, and our pilot became engaged in a heated conversation over his VHF radio.

“ETA at the lock is 5 minutes” he called in initially to the Pedro Miguel lock master; the reply came back that the lock gate could not be opened for 10 minutes.

“I am making minimum speed” our pilot replied, “You must open the gate now!”

“I cannot open it!  The lock is not yet full!” was the reply.

We were still making 4 knots toward the closed gate, unable to reduce speed any further.  A 30,000 tonne bulk carrier, the 'Crimson Galaxy', was following us, a little over two hundred metres astern, and would be sharing our lock; Colin looked worried.

We breathed again when we saw the gate begin to open, just in time to admit us.  As we tied up at the far end of the lock, the bulker moved in, dragged by the bright yellow mules until her huge flared bow towered over us at almost the height of our lower topsail yard. 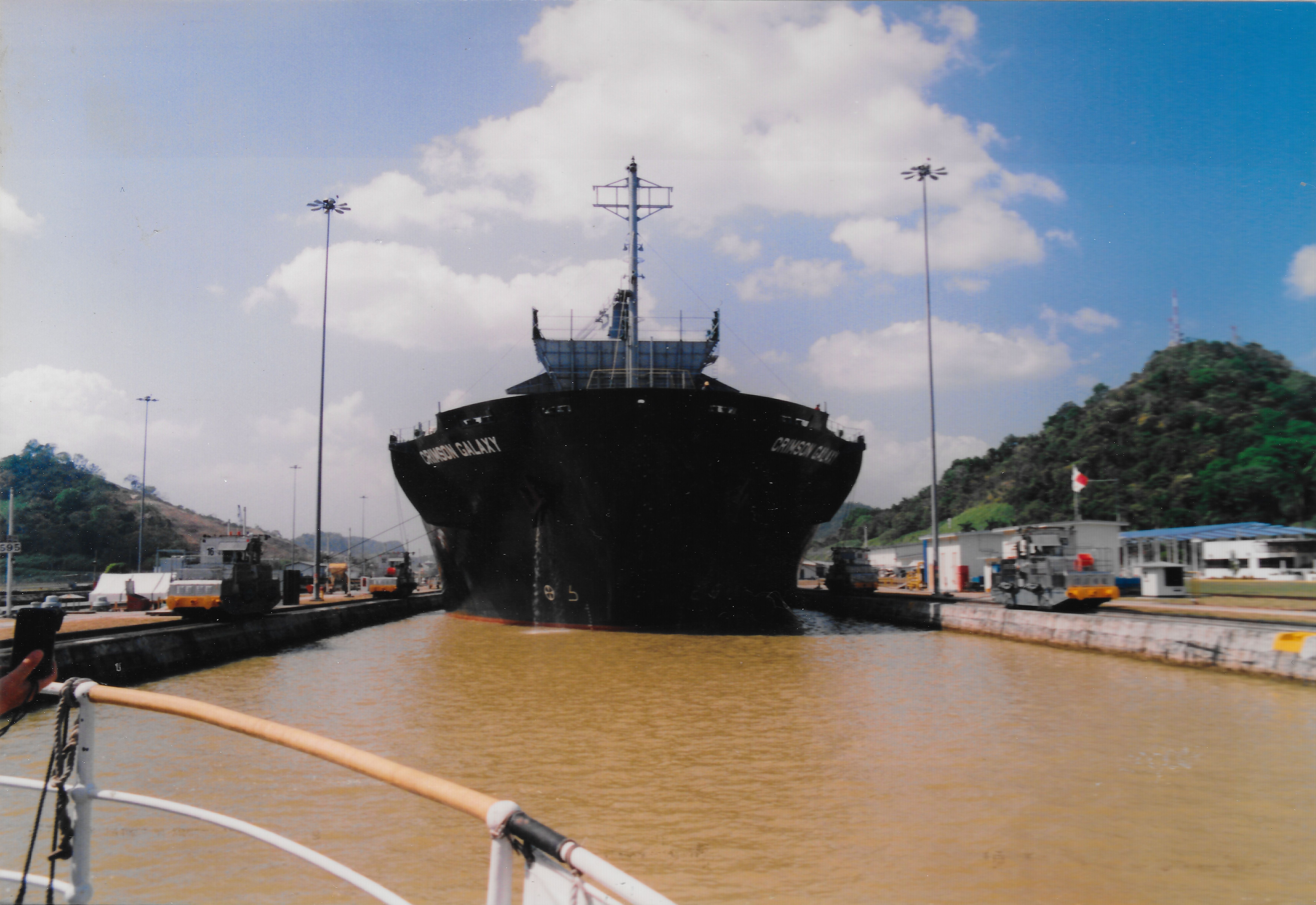 Our line handling teams had an easier job now that we were dropping down through the locks; easing out steadily was easier than heaving up slack, keeping our ship central in the lock as the water level fell.  We passed through the two locks at Pedro Miguel, and into the three-stage drop at Miraflores.  The midday heat was fading into evening, there were only three more locks to negotiate, and the Pacific Ocean was tantalisingly close.  But this tense day had one more piece of drama for us.

“We have to be quick, leaving this lock” the pilot explained to Colin in the last lock.  “There is a current, where the fresh water in the lock mixes with the sea.  I am going to keep ahead of this current.”  I saw Colin nod uncertainly, however when the lock gates opened and our lines were let go, and we begun to move ahead, the ship took a slew to port.

“Hard-a-starboard” the pilot ordered the helmsman.  Still the ship turned to port.  “Half ahead the engine.  Full ahead…!”  But it was no good – the swing was uncheckable.

The width of the Panama Canal is only slightly more the waterline length of Søren Larsen; I felt the ship judder as her stem hit the left side of the canal.  Luckily the canal sides were low, and the vulnerable jibboom, bowsprit and head rig extended far over the concrete and grass; the sturdy stem, built from a massive piece of solid Danish oak fifty years previously took the brunt of the collision.

Nothing happened for a second or two, then Colin’s voice boomed, “Get some bloody lines ashore!”

The shocked-looking canal linesmen took our lines, we made fast, and Colin manoeuvred using the lines to straighten the ship up.  Sally returned aft from a hasty inspection, reporting no damage.  “Just a bit of chipped paint...."

Round the next bend to port, we saw the Bridge of the Americas crossing the canal, the sea widening to a glittering horizon underneath.  We slowed just before the bridge to allow a pilot boat to come alongside; our pilot stepped off and we pointed the bow for the bridge, passing under and gaining our admission to the Pacific Ocean. The Bridge of the Americas, gateway to the Pacific

We anchored by 1800 off the Balboa Yacht Club, and as the last sunlight faded all hands enjoyed a well-earned drink after a long day; I felt that Captain Colin’s glass of rum must have tasted sweet after the trials of the canal.