South America #3 - Mountains and into the Inca Heartland!

Mountain roads carried us through valleys, across streams, then traversed mountainsides; our bus followed the six-metre strip of rubble that separated the sheer cliff face that climbed to the heavens on one side from the plunging drop into oblivion on the other. 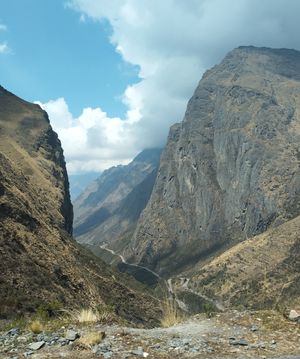 The road switchbacked its way down precipitous slopes to lower valleys, wound along these then began further descents. It grew dark, and the comfortable reclining ‘semi-cama’ bus seats gave us a sense of security as the bus twisted and wound along the remarkable feats of engineering that are Perú’s road network.

(Picture to right: roads through Andean valleys in Perú)

Sometime during the night we reached the coast road and the ride steadied out; we hoped our ears may have popped for the last time this journey.

As the daylight grew once more we passed through desert, occasionally interspersed by bursts of green – trees, fields and habitation – indications of where the rivers and streams flow west from the Andes.

The prevailing global air flow in these latitudes is from the east; trade winds cross the Atlantic, picking up moisture from the tropical ocean surface until they reach the Eastern seaboards of Brazil, Guyana, or Venezuela. Crossing the Amazon basin, and particularly once they reach the Eastern foothills of the Andes, these airflows begin to drop their moisture as rain. Imagine a wet sponge being gradually compressed and losing its moisture as it moves across higher and higher terrain.

Only dry, dusty remnants of this tropical airflow make it through, around, or over the Andes; this and the fact that the prevailing wind flows northwest along the west coast of the South American continent, tending slightly off the land, keeps this region west of the mountains one of the driest on earth.

We changed buses in Lima, continuing onwards to the town of Ica, where the Río Ica flows through – creating an oasis, and Perú’s best wine producing region. Ash and I caught a tuktuk out to Huacachina crater, right next to Ica Town - a microcosm of this larger oasis that appears as the classic stereotype of a desert water hole. 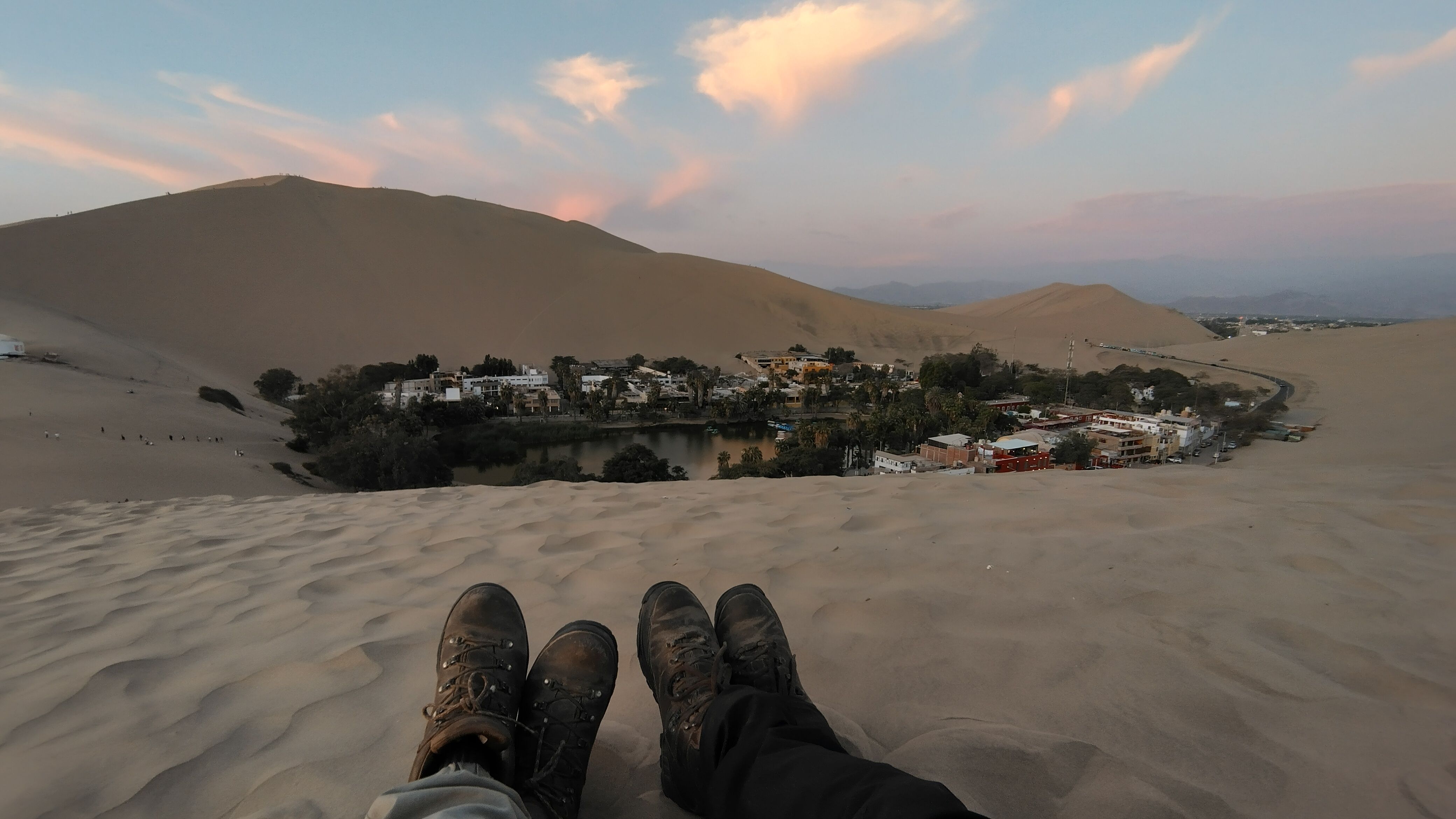 Resting in the dunes above Huacachina

Two days later, and aboard another bus, we turned inland and started ascending once more, to Arequipa, Perú’s second largest city, which lies at 2,300 metres above sea level. However, from here it’s not necessary to go far to reach much higher altitudes.

A local bus, rougher and readier, was our transport further into the mountains. Within two hours of leaving the terminal terrestre in Arequipa, we had wound our way up to over 5,000 metres of altitude – higher than any peak on the European continent – before descending once more into the valley that becomes the Colca Canyon, one of the world’s deepest canyons.

We were getting into the Inca heartlands now, and the mountainside on both sides of the valley rose with the terrace farms that converted these inhospitable slopes into a breadbasket long before the Europeans arrived. 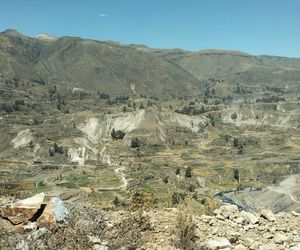 We spent the night in Cabanaconde, a Quechua-speaking village with a pleasant central square and a crisp mountain-ridge background that lit up golden in the rising sun the next morning. 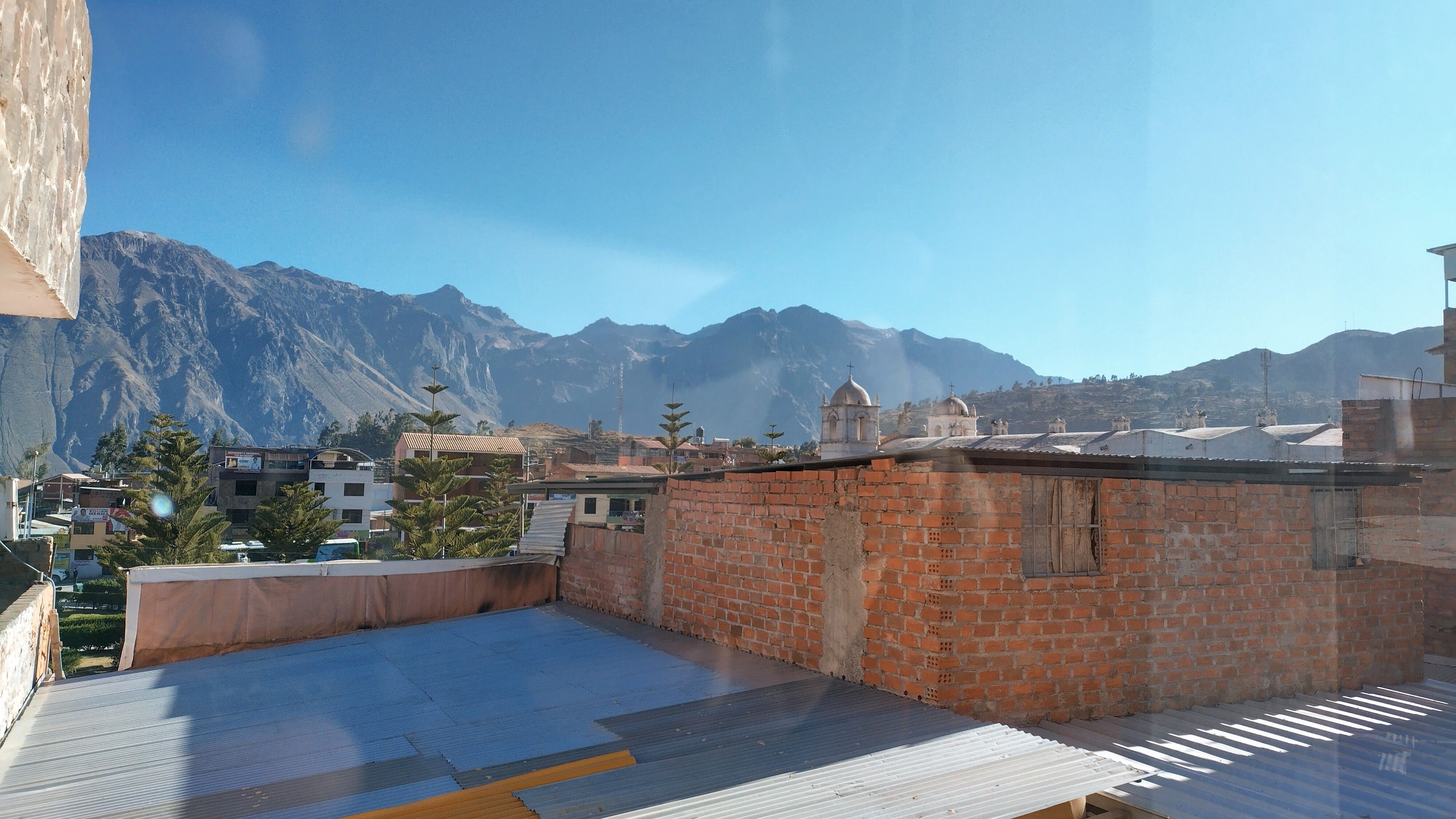 Mountains rise behind Cabanaconde at 6am

A colectivo, a shared local minibus, took us along the canyon; hopping out midway, we walked the canyon edge and caught sights of condors soaring. 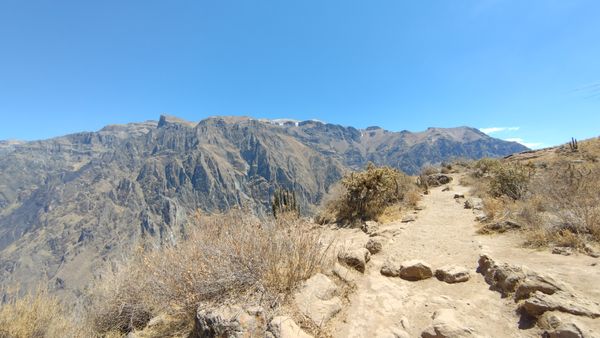 Being the restless type, I strode off along the canyon in search of more sights; Ash sat in the shade and was rewarded by Andean foxes, swifts that flitted among the cactuses and hummingbirds that hovered sipping from the yellow flowers that grew on the small scrubby trees. It’s a real lesson for me to learn that we often see more by sitting quietly and allowing nature to come to us. 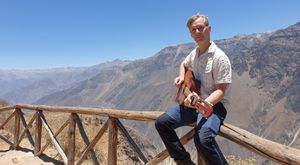 It’s becoming clear on this trip that Ash is moved by the nature and animal life of the region; where my interest often lies more in the human history and culture. Continuing into the Andes once more, we reached the Inca capital of Cusco at 5am. 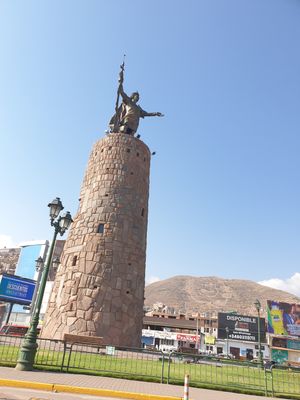 I tested my Quechua phrases on the taxi driver who took us across town – ‘yo meka, ke kankii?’ was my phonetic attempt to say ‘hello, how are you’. The driver was delighted, and talked us through (in Spanish) the sights we saw in Cusco as we drove towards San Blás, the oldest quarter of this incredible town, rebuilt by the Spanish in the mid-1500s, often on the foundations of much older buildings.

We saw the great statue of Pachacuti, the Inca leader during the building of Machu Picchu and at the time of the Spanish arrival; how even the street layout was designed by the Inca to take the form of sacred creatures; and the huge symbols cut into the mountainsides that surround the city.

Of course we had to see Machu Picchu and the Incas’ Sacred Valley while in the Cusco area. Without the funds or the months of advance booking required, the popular Inca Trail was not available to us. Instead we caught a minibus for a wearying seven hour drive across the mountains. At the highest summit, I caught a view of a small shack with woven roof, surrounding fields that looked across the tops of the clouds that submerged the valley and towards the opposing mountain peaks. I felt that living at such altitude must give a very different perspective on the world, looking down on the rest of humanity like a bird.

Dropped off, below once more, at a hydroelectric dam, we walked 10 km through the jungle valley following the rail tracks and the river, with dizzying sheer mountains rising on both sides. Atop one of these, far above us, we caught our first sight of the walls of the site itself. 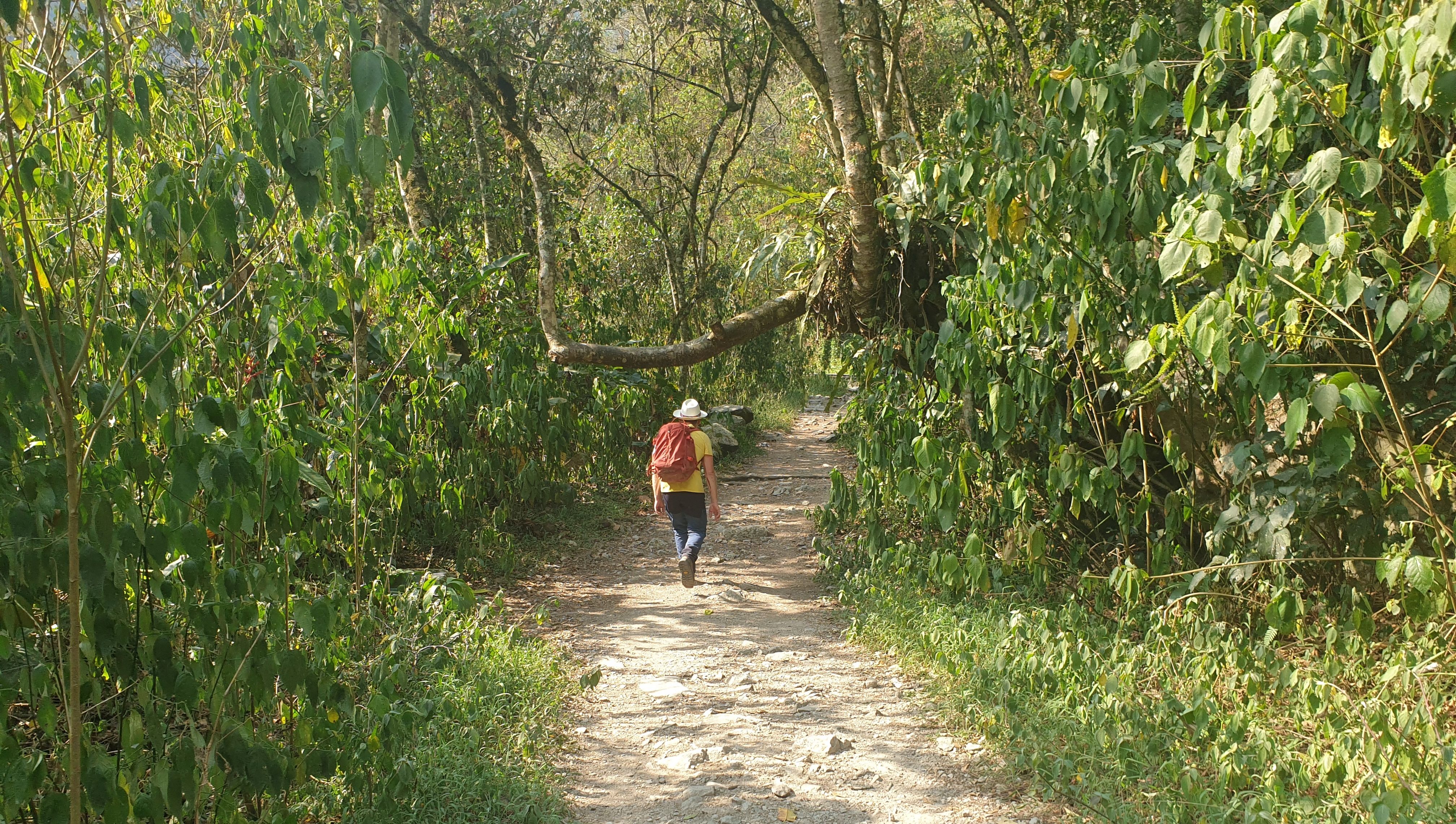 Walking the path to Aguas Calientes 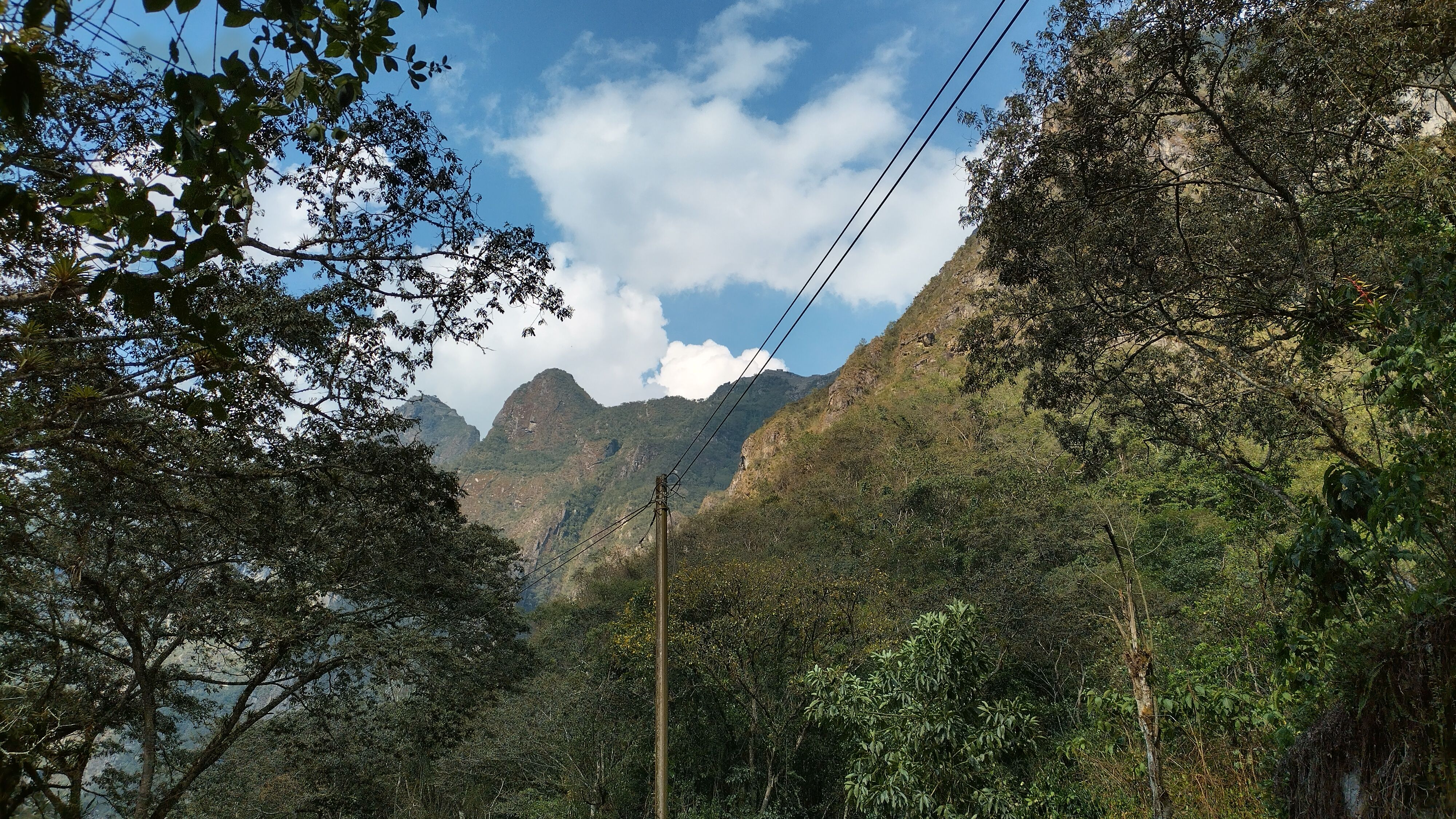 First views of the site at Machu Picchu

We arrived at the small town of Aguas Calientes by sunset, found our accommodation and arranged entry to the site for the following morning.

Only reachable by train or on foot, Aguas Calientes is built next to the river Urubamba. Just a farming hamlet until the discovery of the famous Inca site, it is now the hub and base for many who visit Machu Picchu. From here, buses (brought in by rail) drive the hairpin roads up the mountain to the site, 400 metres above.

How can I describe Machu Picchu? I felt the weight, history and significance of this place as soon as I set eyes on it. However, even without the historic ruins, this mountain top would feel special. The world drops off on all sides; other sheer peaks are all around, falling away in the same way. The town, river, everyday human life, take place far below. Something clicks in my brain, and it all seems to make sense – the Inca view of the three planes of the world: the Hanan Pacha (the world above, of the gods, represented by the Condor); the Kai Pacha (the world of the living, represented by the Puma); and the Uku Pacha (the underworld, represented by the serpent).

The river snakes along the foot of the valley, looking static and eternal from this height; the town, where normal life continues for the people down there. But up here, I feel a parallel with the shack we passed yesterday – viewing the world as a bird, separated from earthly affairs, from normal life, somehow even from time.

The pictures of the remains at Machu Picchu speak for themselves. Our guide tells us that it’s likely that this site was a retreat, a spiritual getaway for the Inca ruler Pachacuti and his descendants. He paints a picture of activity, of constant runners and prrovisioners coming and going along the four-day walking trail from Cusco; of the great Inca himself being carried along this trail along with his retinue. How Cusco would be the place of earthly, everyday life; and here, Pacha could be elevated to the realm of the condor. A population of 750 maintained to ensure all was ready whenever he chose to spend time here; and also to reinforce the borders of the Inca empire.

The engineering to ensure the stability of this mountain top town also provided the terraces that were used to grow the food required; terraces were constructed inside a retaining wall, with layers of stone in decreasing size, topped with soil, to ensure the correct rate of drainage so that crops did not become waterlogged. 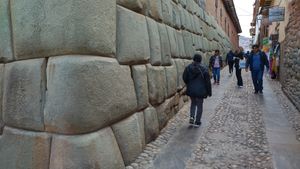 The exceptional stonework in the buildings (better quality stone construction was used as a sign of devotion in more important religious and ceremonial buildings) is humbling for anyone who (like me!) has struggled to build a drystone wall. No packing or mortar was used for the finest buildings - just a perfect fit.

We walked back down to Agas Calientes, down the path that winds down the mountainside shaded by thick tree cover, with perhaps a better understanding of what it is to live amongst such mountains. Life is dominated by the mountains; the vertical becomes as important as the horizontal. The planar simplicity of life on the coast is replaced by an otherworldly understanding of our place on earth – our altitude always kept in mind, always looking up or looking down.

We wound back along the road to Cusco, over the mountain pass, through the sacred valley, past the terrace farms, as the driver’s pan-pipe music blared out - tired and altitude-addled, and ready for a rest before the next adventure.