The arrival in the post of Jim Cottier's memoir (Thank you Geoff Saunders!) 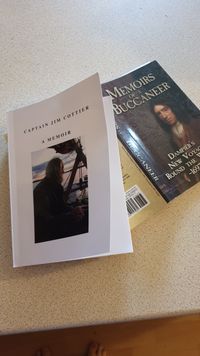 just before Christmas brought back memories of stories, both lived with and heard from Captain Jim. As soon as the book arrived I put down the one I was reading - Wiliam Dampier's 'Memoirs of a Buccaneer'. (I do occasionally read something that's not the memoir of a swashbuckling seafarer, honest...)

It was in Panamá that I first met Jim - in fact, it was 25 metres above the turquoise waters of Balboa Bay, where I was hanging off the end of the upper topsail yard, engrossed in renewing an earring lashing. I was startled from my work by a voice from the crosstree platform to my right, with a question about the lead on the topgallant sheet.

Our new captain was white bearded, slightly gaunt of face, with keen grey eyes and a gold ring in his left ear; energetic and clearly with an intimate knowledge of Søren Larsen's rig, having spotted that the sheets had been rigged the wrong side of the clewline back in England. I'd heard many stories about Jim in my 3 months on board - he was married to Terri, our purser, after all; a master mariner who had gone to sea at age 15; a one time hippy; expert navigator and shanty singer. I had been looking forward to meeting Jim.

So began one of the most epic legs of our journey so far. Our new crew joined - along with several who had been with us since Curacao, this group would be with us for three months, covering over 6,000 nautical miles. Fortuately, this crew turned out tio be equal to the voyage - a singular, enthusiastic and fascinating group, all of whom I still count as friends for life.

The wind was blowing lightly from the south that evening as we sailed; with no engines running, and a main sail half-set, we shortened up the anchor, braced the yards to starboard, and set the lower topsail.  With a backed outer jib helping to pull the bow round to port, we heaved the anchor the rest of the way up on the windlass.  The ship turned, slowly, slowly; the 10 crew stationed in the waist heaved the yards round to port; and as the lower topsail began to fill, the foredeck team set the upper topsail and course with a ruffle of canvas, and Soren Larsen’s 300 tonnes begun to gather some headway.

Soon, the sun lowering over the Pacific horizon, we sailed slowly south into the Gulf of Panama and turned to the west, and I found it easy to imagine I was among the first group of adventurers to discover this ocean, to leave a wake shimmering behind in the darkening indigo sea or to cut the golden watery road that lay ahead, empty and inviting.

TWO nights out we found the doldrums.  The swell rolled up from the south in long, gentle three metre high hills as we motored west at 6 knots, the 1949 B+W Alpha engine clunking away pleasantly.  The sea lay so smooth that the reflections of the individual stars that filled the sky could be seen in its surface, and my midnight-to-four watch stood around by the wheel, silently gazing up at the heavens, or out at the sharp, black horizon.

The area between Panama and the Galapagos is notorious for calms, and was avoided by sailors in the past because of this.  We had expected to do a considerable amount of motoring during this part of the journey, and had loaded extra drums of fuel on deck in preparation.  But Søren Larsen’s hull, designed for sailing, slips easily through the water when there is no wind, taking little driving; and the engine burns less than 20 litres of diesel per hour.

By day, my 12-4 watch was the hottest part of the day, a time when many of the other watchkeepers take a sleep in preparation for their own night watches, We would often therefore have the ship to ourselves, and wearing sun hats and sun cream, drinking plenty of water, stand our watch in the hot sun, which this close to the equator the sun is almost directly overhead, and bleached blond sunlight would dance off every wavelet of pure blue sea.  The wooden deck grew hot, and the watch would regularly wet it down with sea buckets to prevent the timber drying out and cracking, the salt water feeling blissfully cool on our bare feet.

Five days after leaving Panama we sighted Coco Island, approaching as the grey smudge turned to green and became a high, cliff-sided island. Wterfalls appeared, then forests, then plunging valleys; and eventually, we approached the east end of the island and motored into Chatham Bay.

Crystal clear water meant we could see our anchor chain running out ahead and down to the sandy seabed 30 metres below; as we pulled the chain taut and gently brought up to the anchor, I watched a variety of fish float around by the side of our ship. Suddenly they disappeared, and the reason why became apparent - the unmistakeable form of a hammerhead shark! Soon we had five of these creatures swimming around us, and Terri and Troy were excitedly planning a dive for the following day.

This isolated outpost of Costa Rica feels very primal with thick green jungle that cloaks the precipitous slopes, and untamed waterfalls that cascade off its cliffs, casting their own rainbows before dissipating into clouds of steam.  The island is uninhabited, except for a few Costa Rican rangers stationed here.  European pirates were reputed to have buried treasure on the island in the 19th century; prior to this, Polynesian or South American seafarers visited to create the coconut plantations that give the island its name, but did not stay; otherwise, Coco Island may have always been uninhabited.

Lucy, Jima and Sally Anne and I climbed the steep, long hill from the small boat landing, enjoying our half-day of shore leave.  Sweat soon soaked our clothes as we followed the narrow path that ascended through thick forest.  The sun was fierce and the air humid; but it felt good to use our legs after days aboard the ship, and we managed a rapid pace, keeping an eye open for treasure chests laying by the path side. 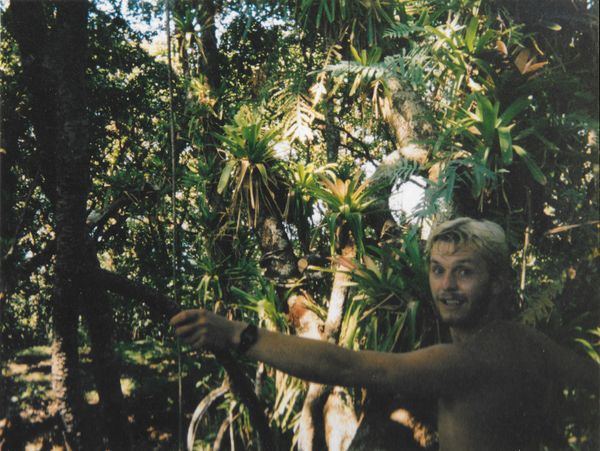 We walked along the ridge, spying the speck of white that was the ship far below.  Half an hour along the well-marked path took us to the ranger station, a simple white-painted plywood building built on stilts.

The rangers had knocked off for the day, and were unwilling to take us anywhere; but Jima, Kevin and I were desperate to see - and swim beneath - one of the island's waterfalls. Certain that we could find our own way, we set off through the jungle  - and within half an hour had found the deep pool into which cascaded a heavy waterfall. We swam and splashed under the torrent, and the weight of the water hammering on my shoulders was about as much as I could bear - nature's perfect massage!

On the way back, however we lost the path, and decided to follow the stream instead. It took longer than expected and soon we were running, leaping from rock to rock, wading through the fast flowing water, getting worried about the time. Finally, beginning to worry that we had taken the wrong path altogether, we ran straight out into the clearing by the ranger station, panting and laughing, with just enough time to spare to run over the ridge in the evening heat , to slip and slide down the path on the other side, and to catch the launch back to Søren Larsen.

That same evening we were on our way once again, the doldrums still persisting, the same three-metre swell rolling in as we motored south west now, towards our next destination - the Galapagos Islands.